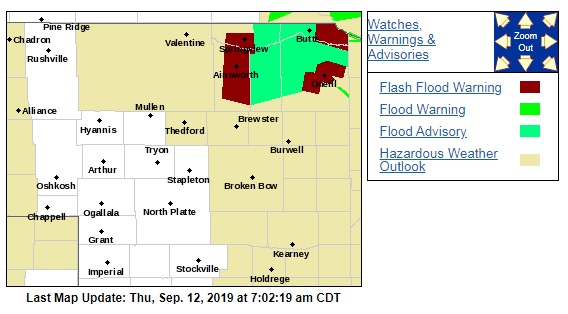 According to KBRB Radio, all roads in Brown County are closed following a second night of heavy rainfall. More than 4 inches of rain fell for the second straight night, and floodwaters have washed out numerous culverts and roads in the county.

Brown County Highway Superintendent Kenny Turpin said no travel is recommended on any county road, as the county is unable to flag all of the damaged areas. Meadville Avenue has several areas that have been damaged or washed out, and one motorist had to be rescued on Meadville Avenue early Thursday morning after their vehicle entered a washed out area of the road.

Turpin reported the north approach to the bridge over Sand Draw Creek on the Meadville Avenue detour route has washed out. Both approaches to the “Sisson” bridge on 433rd Avenue between Road 880 and Road 882 are washed out.

In Ainsworth, Second Street is closed and is barricaded from Ulrich Street due to water flowing over the street.

Water is flowing across Highway 20 in several spots west of Ainsworth.

There is a 10 a.m. late start at Ainsworth Community Schools, and the school advises any parent who feels they cannot get their child to school safely today to simply call the office, it will not be an issue for the student to miss class.

A flash flood warning remains in effect for the area.

The Keya Paha County Courthouse reported yesterday that up to 6 inches of rain fell and caused the closure of the River Road between Mule Shoe and Norden, and recommended avoided Carns Road, 442nd Ave, Rock Barn area several locations on the Riverview Road, which have experienced washouts.

In South Dakota, Highway 83 from Murdo to White River remains closed. Travel on all county roads is not advised at this time.