Scammers Still Out In Full Force 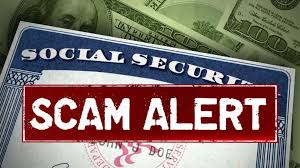 Move over, Internal Revenue Service. Criminals now prefer the Social Security Administration as their cover agency when they try to swindle Americans over the phone.

Federal authorities say they have seen fraudulent calls from Social Security Administration impostors “skyrocket” over the past year, overtaking the fake I.R.S. Calls.

According to the New York Times, people filed over 76,000 reports about Social Security impostors in the 12 months ending in March, with reported losses of $19 million, according to the F.T.C., which investigates consumer fraud. About 36,000 of the complaints and $6.7 million of the losses were reported in February and March.

By comparison, the agency said, consumers reported $17 million in losses to the I.R.S. scam at its peak, during the 12 months that ended in September 2016. The data comes from the F.T.C.’s Consumer Sentinel Network database, a pool of millions of consumer complaints.

A typical loss for those who reveal their loss to the F.T.C. is about $1,500, the agency said.

In some cases, as with the I.R.S. calls, the criminals are quite aggressive and try to scare their targets into action. In one common tactic, the fake callers tell the potential victim that his or her Social Security number has been “suspended” because of suspicious activity or because it has been involved in a crime. The callers may ask their victims to confirm their Social Security numbers. They even say that the victims must withdraw cash from their bank accounts and that the accounts will be frozen if the victims don’t act quickly.

Some people are scared enough that they follow the caller’s orders to withdraw money and put it on a gift card, then give the card’s number to the criminals. Less commonly, the F.T.C. said, people have followed instructions to withdraw cash and convert it into a digital currency, by depositing it into a Bitcoin A.T.M., where it becomes accessible to the thieves.

In general, if you get an unsolicited phone call asking for detailed financial or personal information, be suspicious and don’t share any information. “The S.S.A. will not contact you out of the blue,” the F.T.C. said.

Don’t automatically trust the phone number on your caller ID screen. Criminals may use “spoofing” technology to make the call appear to be from a government number.

The best thing to do is hang up, said Amy Nofziger, director of fraud victim support at AARP Fraud Watch Network, which helps consumers who are worried about such calls.

If you’re unsure whether the call was a fake, call the agency directly — using a phone number you’ve checked independently, not one given to you by the caller. The Social Security Administration’s main number is 1-800-772-1213.

You should also report fraudulent calls. You can report them to the inspector general by calling the hotline number or going online.