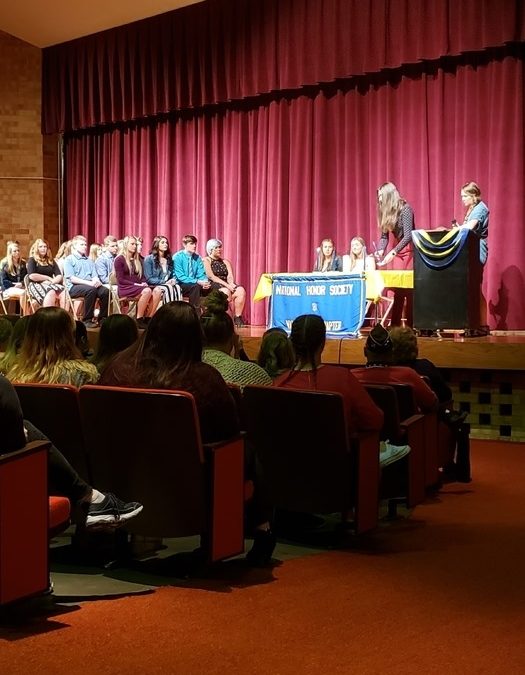 TeamMates scholarship award of $500.00 each went to: Tamara Benedict, Riece Rivera, and Logan Pettigrew.
Calvin Stoeger received $500. a pin, and a certificate as Nebraska State Daughters of American Revolution Good Citizens Award for his essay.
Youth Citizenship Awards were also given to: Kassity Denbo, Taylor Battershaw, & Grand Springer
Nominees for the Believers and Achievers Award were Elliana Springer, Calvin Stoeger, & Chris Williams
Omaha World Herald All Academic Honorable Mention awards went to: Calvin Stoeger, Elliana Springer & Shyanne Urbin
Norfolk Daily News All Academic Team award went to Elliana Springer.
Congratulations to this year’s recipient of the new Danielle Arganbright Spark Plug Award, which was given by Mr. Cronin to Danielle Arganbright. This will be a yearly award given out and passed down from one year to the next.

ATTENDANCE AWARDS
The following is a list of students having perfect attendance from August 15, 2020 through May 7, 2021:
Freshmen: none
Sophomores: James Woodraska
Juniors: .none
Seniors: Kenny Shelbourn
The following have missed one day or less of school this year:
Freshman Kinsey Buechle, Sophomores: Lainey Egelhoff & Michael Caley; Junior Jordan Kruger

The following Seniors missed the least amount of days throughout their 4 years at VHS and each received a gift certificate for $20.00 at Old Mill: Kenneth Shelbourn, Hank Lancaster Calvin Stoeger, Haley Hesse, & Josiah Maunu

Shauna Radant was the recipient of the H&R Block’s Business / FBLA Senior of the Year and received a $1,000 Scholarship

BROADCASTING AWARDS from Danielle Arganbright
Each member of the broadcasting class, Badger Cast has been awarded a ‘You’re a Star’ award. I can’t thank them enough for all their help this year to make sure our games and events were broadcasted and shared with all the friends and family from afar. Badger Cast members are Tim Egelhoff, Kane Fowler, Fletcher Larsen, Holden Mundorf, Holden O’Dell, Jace Patterson, Madelyn Pilakowski, Ian Slama, and Calvin Stoeger.

My on the Ball award goes to Fletcher Larsen, he is a student that always knows what is going on whether that is on the school calendar or current events he stays in the know.  The Salt of the Earth Award goes to Calvin Stoeger. Calvin is a very kind student, reliable and always showed up willing to help. Sharp as a Tack goes to Holden Mundorf. He is the tech guy that we can all count on or go to with questions. He is always willing to try and figure something out if he doesn’t know. My Go the extra Mile award goes to Tim Egelhoff and Maddy Pilakowski. These two students could be asked with a few hours to spare if they would be able to help stream an event and if they didn’t have anything going on, they would step up. Without this crew, none of our events would’ve been streamed. Thanks to all the local sponsors for supporting us and allowing us to create ads for our stream. Hometown Lumber, Arganbright Law Office, Henderson’s IGA, Cherry Hills Estate, KVSH, Outback, Security First Bank, BrokenSpoke Boutique, Scotty’s Ranchland, Sandhill Oil, Sandhills State Bank, Ward Plumbing and Heating, and Speedee Mart.

Thanks to the staff members at Valentine Community Schools for participating in our first ever casual Friday campaign. We renamed the day to Scholarship day as we were able to raise $1500 to award members of our Student Council a scholarship. The recipients of the 2021 Student Council Scholarship are Fletcher Larsen, Michaela Keller, and Shauna Radant. All three of these students have put forth extra effort to help with school and community activities. Congratulations