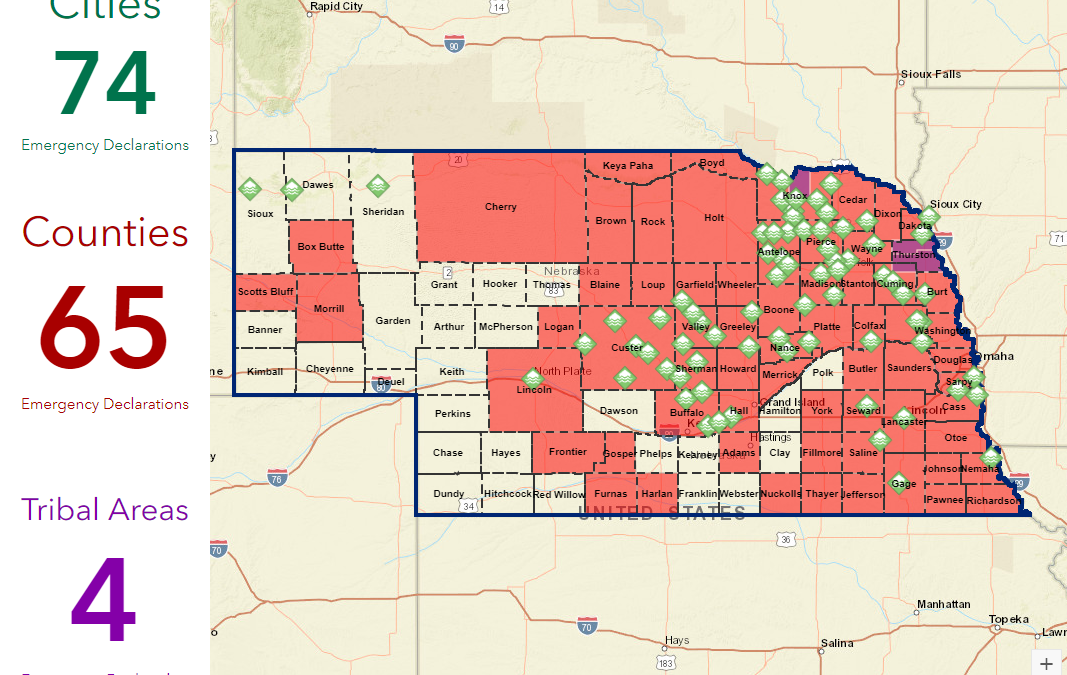 The Nebraska Emergency Management Agency (NEMA) continues to work with multiple public and private partners to serve those affected by the floods in Nebraska. Information as of 6:00 pm CT 3/18/19.

Evacuation update: 29 counties have had mandatory or voluntary evacuations across the state since flooding began last week.

Nebraska State Patrol: Over the last 24 hours, the Nebraska State Patrol, working with the Nebraska National Guard and the Nebraska Department of Transportation, led three convoys of semi-tractor/trailers and fuel tankers from the Omaha area to Fremont, Nebraska. The first convoy left Omaha on Sunday at 5:30 p.m. and arrived in Fremont two hours later. Today, a faster route was created by NDOT that’s allowed two more convoys of trucks, including one with 17 semis full of supplies, to make the journey.

Information on road closures can be found on the Nebraska 511 map at https://www.511.nebraska.gov. Nebraska 511 can also be accessed through the 511 smartphone app or by dialing 511.

Ag Update: Agriculture producers who have been impacted by the blizzard and flooding and are now in need of hay, feed stuffs, fencing materials, volunteer help, equipment, etc. should call the Nebraska Department of Agriculture (NDA) at 1-800-831-0550.

Of the calls that NDA received today, about a third were from farmers and ranchers in need. Two-thirds were from people offering supplies and assistance.

Donations: The Nebraska Preparedness Partnership is currently accepting donations. These donations will stay in Nebraska and will be used for these catastrophic flooding/blizzards. Call Sandra Hobson at 402-979-7207 or email her at shobson@neprep.org for more information.

A list of reputable national and state organizations can be found on the Nebraska Volunteer Organizations Active in Disaster (VOAD)’s website,www.nvoad.org. By giving to any of these organizations, donors can be sure that their funds will be distributed to those most in need.