Damage Continues to Be Assessed 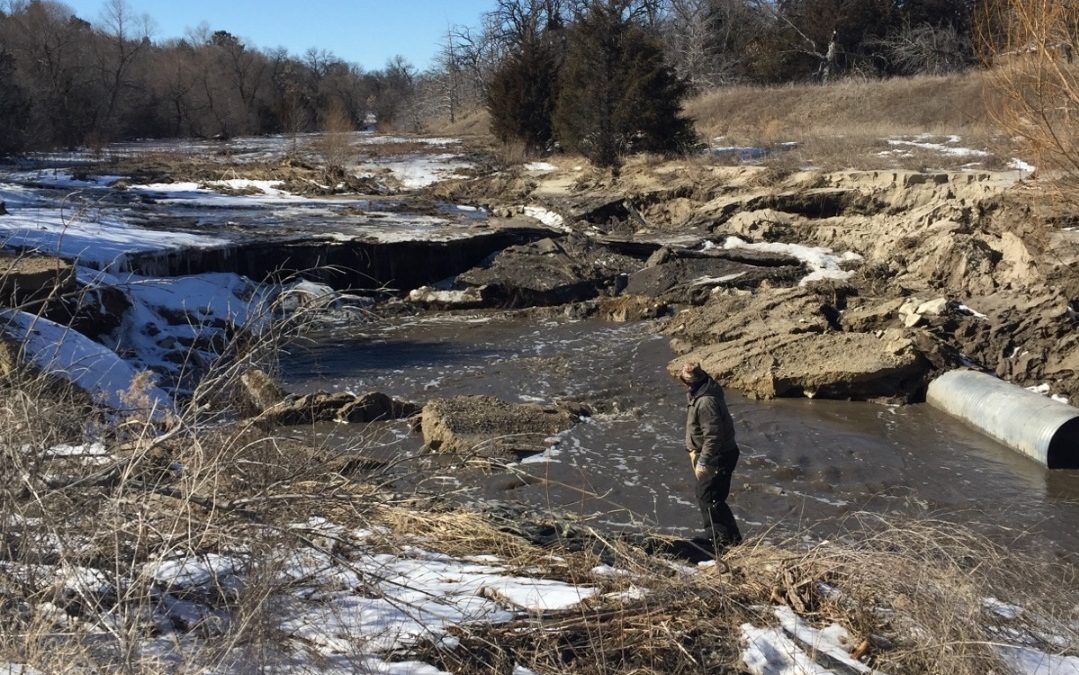 As clean up efforts continue, many area residents are still assessing the damage done from last week’s storm. Pictured is Shepard Hill Road in western Keya Paha county, north of the Niobrara River. Roads, structures, and especially livestock were hit hard and recovery efforts will be an ongoing process. The Nebraska State Patrol reminds the public “Please don’t come to closed areas to sight see. You put yourselves at risk and the first responders as well. Barricades are placed and roads are closed for safety.”

CNN Reported this morning on the floods:

Many Nebraska towns have become islands, highways are now fast-flowing streams and dozens of flood records have been broken — but there may be more flooding to come.

The Nebraska Emergency Management Agency (NEMA) says more rivers will break cresting records in the next two days. According to the National Weather Service, a crest is the highest point of a flood wave. After passing that particular point, the water level usually stops rising and stabilizes.

The Elkhorn River at Waterloo crested at 24.6 feet on Saturday, breaking its 1962 record by 5.5 feet.

The Platte River, which starts in the Rocky Mountains flows through Wyoming, and Nebraska, eventually making its way into the Missouri River, which meets with the Mississippi.

The Missouri River is expected to crest at 47.5 feet on Tuesday, breaking its 2011 record by more than a foot, NEMA said. The flooding is expected to continue through Thursday.

James Wilke, a Columbus farmer, was called to go and help rescuers that had been stranded by flood waters in Platte County, according to CNN affiliate KMTV.

“With the guidance of emergency responders, James drove his tractor over the Shell Creek bridge on the Monestary Road and the bridge gave out. James and the tractor went down into the flood water below,” Jodi L. Hefti, a family friend wrote on Facebook.

A second Nebraska man, 55-year-old Aleido Rojas Galan, was caught in floodwaters across the state line in Iowa.

There’s still about 9 million people across 14 states along the Mississippi and Missouri rivers who are under a flood warning, CNN meteorologist Karen Maginnis said.

The floods and cresting come in the aftermath of a powerful “bomb cyclone” that slammed the central United States last week, bringing hurricane-like winds and blizzard conditions.

The water left behind ended up in rivers and streams, causing the flooding and cresting, days after the rain was over.

More than 80 Nebraska National Guard troops will spread across the state to keep drivers out of closed areas which are under water or have been damaged, according to CNN affiliate KETV.

Nebraska’s Offut Air Force Base, a little south of Omaha, was also battling floodwaters Sunday — with water reaching about 30 buildings, according to a press release.

“Team Offutt has done an incredible job working together to battle this historic flood as best we can,” said Col. Michael Manion, 55th Wing commander. On Sunday, he announced the 55th Wing, housed in the base, was “essential personnel manning only.”

In Iowa, a mandatory evacuation order has been issued for some residents of Pacific Junction, KETV said. A county board resolution passed Sunday will establish a $750 fine for anyone who violates the evacuation or curfew orders, according to the news station.

Nebraska Gov. Pete Ricketts and Rep. Don Bacon toured shelters Sunday, talking to displaced residents and evacuees of the floods. Red Cross volunteers are working in more than a dozen shelters across eastern Nebraska and Iowa.

As the process of recovery begins, NEMA urged neighbors affected by the floods to look out for each other.

Some signs to look for in the aftermath, the agency said, include increased use of alcohol, tobacco or other drugs, feelings of anxiety, disbelief or numbness, physical reactions such as headaches and worsening of chronic health problems.

Some steps to cope include connecting with others and maintaining healthy relationships, staying informed but avoiding “too much exposure to news,” and taking care of your body.