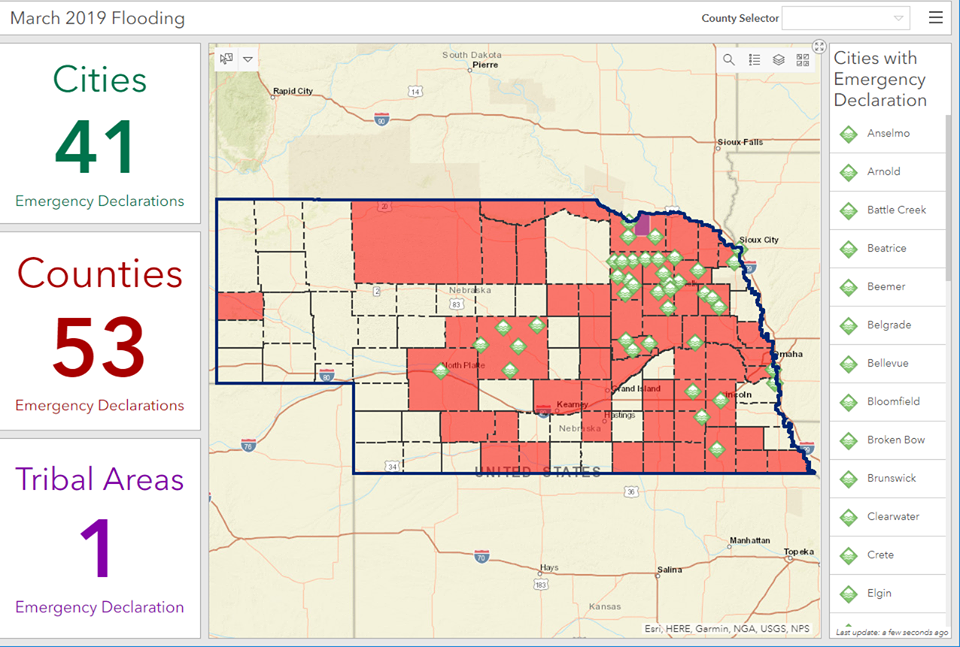 (For comparison, the 2011 flood had zero rescue missions by these assets)

Track up to the minute developments related to NEMA’s disaster response and recovery by going to: www.nema.nebraska.gov

Additionally, this report was released by KBRX Radio in O’Neill:

KBRX visited with Boyd County Sheriff Chuck Wrede on Sunday, March 17 at 10:45 am and received the following updates:
To squash some rumors the Highway 11 bridge south of Butte did not collapse. It is still closed and the only way to get to Boyd County at this time is either the bridge north of Newport, Nebraska or by going via Yankton.
The search continues for missing person Ken Angel.
The West end of Knox County has been cut off from Knox County Sheriff’s due to the loss of the bridge at Niobrara. The Boyd County Sheriff is currently servicing western Knox County.
Anyone that needs cattle moved there have some PBR Cowboys that have arrived and will help with moving cattle. Currently airplanes are searching for any cattle that need assistance. If you need assistance with moving cattle call Boyd County Sheriff Chuck Wrede at 402-340-7072
The Village Of Butte water restriction has been lifted. The boil water advisory remains in effect until further notice. If you are in need of water for livestock it will be available at the fire hydrant at the west end of the baseball field. The Butte Firehall will be open to anyone needing to fill containers of water.
Supplies are available for people in the Lynch, Monowi, Verdel and surrounding areas at the Lynch Community Hall. Please come and take what you are needing. Even those that didn’t have water in their homes but are housing others. Lots and lots of supplies have been donated. On an additional note… Lynch Fire/Rescue and community give a big thank you to those that have contacted us and made those donations. We are currently working around the clock to keep things working as normal as possible
Supplies will be coming into the area daily, watch for updates.
We know Facebook is a great way to get information out and thanks to all for the information. Many rumors and false information are also posted which might alert law enforcement or emergency personnel that they need to respond to an incident which is not true and cause unnecessary travel or loss of time.