State of the Tribes Address 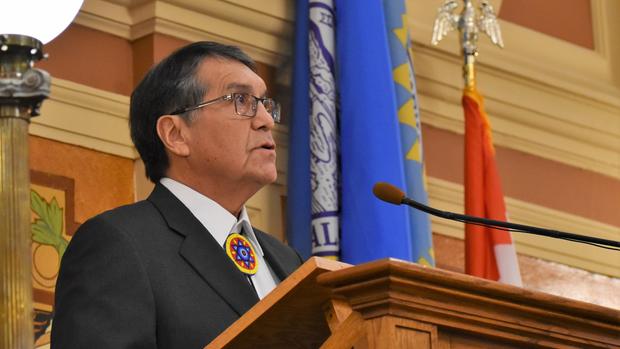 The president of the Rosebud Sioux Tribe on Thursday urged South Dakota lawmakers to expand Medicaid and work with tribal officials to fight the opioid and methamphetamine epidemic.

President Rodney Bordeaux gave the fourth State of the Tribes message, asking legislators and Gov. Kristi Noem to promote higher education tuition waivers for Native American students and to make the availability of mental health services in rural areas and reservations a priority. He recommended a government-to-government summit on meth and opioids.

“The epidemic is depriving children of their parents, families of their relatives, communities of their neighbors,” Bordeaux said in the speech.

The project is being delayed by a federal court that found the Trump Administration didn’t fully consider the environmental effects when it approved the permit for the 1,184-mile pipeline, intended to ship up to 830,000 barrels a day of crude oil from Alberta, Canada to the U.S. Gulf Coast.

“I submit to you that our natural resources are not for sale,” Bordeaux said, adding that he watched with regret as South Dakota lawmakers passed a measure in 2017 to address potential oil pipeline protests.

Bordeaux said tribes believe the law was enacted with an eye for “limiting our people and our right to protest.” The measure imposed new penalties for standing in the highway to stop traffic or trespassing in posted emergency areas.

It came after demonstrations over the Dakota Access pipeline in North Dakota; Bordeaux said after the speech that he would like to see the protest law repealed.

Bordeaux also discussed concerns about “man camp” workers having a negative impact on the community, raising the issue of the high number of missing and murdered Native American women. Noem said during her State of the State address this week that she wants the pipeline’s construction to be “safe, clean and efficient.”

During the address, Bordeaux also urged South Dakota’s federal delegation to do what they can to end the partial government shutdown. He said federal funding makes up three-quarters of the tribe’s budget, predicting after the speech that the tribe would have to start laying people off if the shutdown goes into mid-February.

“It’s going to be hard on our families,” he said.

Bordeaux said the federal government isn’t living up to its treaty responsibility to provide health care through the Indian Health Service. In a meeting with Noem, “we all agreed the IHS is a failure,” Bordeaux said.

He said broadening Medicaid eligibility would cover more people and bring jobs and other economic benefits to South Dakota. It would also provide more access to care and bring in more revenue for the Indian Health Service, he said.

At a State-Tribal Relations committee hearing after the speech, Republican Sen. Lance Russell pushed back against the idea, which had been raised under former Gov. Dennis Daugaard’s administration but faces opposition from Noem and many GOP lawmakers.

“My concern with the Medicaid expansion is that you’re again relying on a government that has failed in the IHS realm,” Russell said.

The tribe’s headquarters is in Rosebud, and more than 21,000 enrolled members live on the Rosebud Reservation in southern South Dakota. Last legislative session, Chairman Boyd Gourneau of the Lower Brule Sioux Tribe gave the address.

“There’s just so many things we need to work together (on),” Gourneau told the State-Tribal Relations panel.