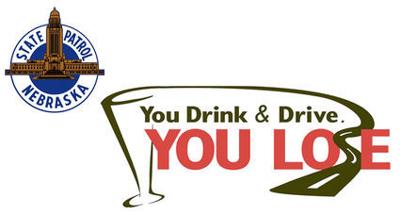 The Valentine Police Department participated in Nebraska’s Department of Highway Safety’s “You drink and drive, you lose” Impaired driving crackdown December 14, 2018 thru January 1, 2019.  Officer participation was done as part of their normal patrols with a focus on seatbelt compliance and impaired driving behaviors.  During this timeframe, Officers made 15 traffic stops resulting in the seizure of methamphetamine, marijuana and drug paraphernalia.  Officers made arrests for possession of controlled substances, child abuse/neglect, Theft of a motor vehicle, 3rd degree assault, warrants and shoplifting.  This effort was part of a statewide effort to reduce impaired driving behavior and to encourage seatbelt use.

Troopers with the Nebraska State Patrol (NSP) worked diligently over the final weeks of 2018 to remove dozens of impaired drivers from Nebraska roads. The annual holidays “You Drink & Drive, You Lose” campaign resulted in 64 arrests for drunk or drugged driving.

“The holidays should be filled with positive memories,” said Colonel John Bolduc, Superintendent of the Nebraska State Patrol. “Impaired driving not only puts yourself at risk of injury or death, but also poses a risk to everyone else on the road. Our troopers and dispatchers worked hard over the last several weeks to take impaired drivers off the road, and ensure safe roads for all of Nebraska.”

In addition to the drunk and drugged driving arrests, NSP issued citations for speeding (1,055), driving under suspension (75), no proof of insurance (54), minor in possession (13), open container (35), no seat belt (57), and improper child restraint (15). Troopers also arrested 66 people for possession of drugs and six for reckless driving.

During the campaign, troopers helped 787 motorists in need of assistance, many coming during the strong snow storm that struck Nebraska last week.

The “You Drink & Drive, You Lose” campaign is made possible thanks in part to a grant for $25,000 from the Nebraska Department of Transportation – Highway Safety Office.