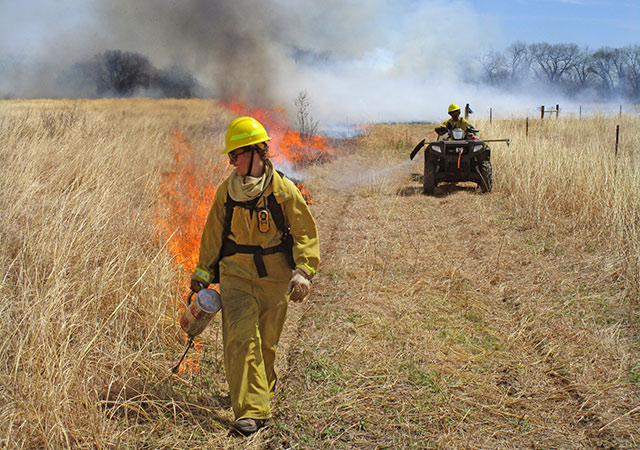 Expect to see smoke in the air at times from March 23rd through April 7th. Fire professionals from all over the U.S. will call The Nature Conservancy’s Niobrara Valley Preserve home as they learn and burn at the ninth annual fire training exchange.

The exchange was designed to meet the training needs of fire practitioners – those who serve state and federal conservation agencies and fire departments, as well as private sector nonprofits, businesses, and landowners. It is also a way to bring much-needed fire to land that will benefit from it.

“We know this landscape is a fire-adapted one, and we’ve seen the good results of regular controlled burns for wildlife and for grazing on the Preserve,” said Rich Walters, Director of Stewardship for The Nature Conservancy. “We’ve also seen what happens when too much fuel builds up. Recent wildfires are a stark reminder of that. Having the personnel to get fire on the ground safely is essential.

Forty-five firefighters from California, Colorado, Idaho, Indiana, Minnesota, Montana, Nebraska, and Utah will assemble in Nebraska. “The Niobrara Valley Preserve has been an important base from which exchange programs have grown,” said Walters. “Folks who have met and trained in Nebraska have duplicated the event in South Africa and Spain.”

Large numbers of workers means a high level of vigilance in planning. Safety is paramount to the exchange’s leaders, who work under national standards. “We choose the safest time of year to hold this training. We anchor into previously burned areas, spend months working on burn plans, and relentlessly monitor weather reports. Local fire departments are involved in the permitting process,” said Walters.

Multiple private and public partners assemble to contribute resources for the exchange. They include: the Great Plains Fire Science Exchange, the National Park Service, The Nature Conservancy, Nebraska Environmental Trust, the Nebraska Forest Service, the Nebraska Game and Parks Commission, and the U.S. Fish and Wildlife Service. The Utah Department of Natural Resources, Ainsworth Volunteer Fire Department, and the Eagle River and Timberline Fire Protection Districts out of Colorado are supplying engines and equipment as well.