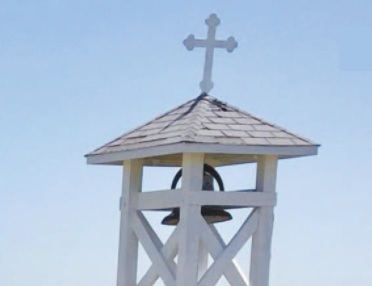 The century-old bell from an Episcopal church on the Rosebud Sioux Reservation in South Dakota has been stolen.

The historic item was last seen before a severe cold front hit the Northern Plains. When that weather was gone, so was the bell.

Lauren Stanley is the priest at St. Paul’s Episcopal Church near the small town of Norris, South Dakota. The church dates back to the 1890s. Stanley said the bell that hung in a 12- foot high tower nearby has been a part of the community since before then.

“We used to use it all the time” she explained. “It was what called the community together for worship. And then the community would come together for 2 to 3 days. They would camp out and have a major visitation with each other, as well as several worship services. The baptisms would be done. They would have Sunday school.”

The two and one-half foot high, 300-pound bell was donated to St. Paul’s by a church on the East coast. It was also used to alert the community to local or emergencies and celebrations, like the end of World War Two and the assassination of President John F. Kennedy.

In recent years it was more of a show piece and was only rung a few times – at a funeral and for several baptisms. But Stanley noted that the bell’s presence reminded congregants of their families from generations that have passed.

“My elders are in tears at the loss of this bell,” she observed. “Because this bell was part of their parents’ lifetime…as well as their own childhood.”

Stanley added that the bell’s theft is equivalent to a child being missing from the community.

St. Paul’s is located about 4 miles north of Norris, on the West side of the road on top of a hill in an area Stanley described as “very isolated”.

The antique bell was last seen on December 30, by the church’s senior warden. She’s visited the cemetery there regularly to pray at the grave of her granddaughter, who died tragically last November.

Due to the severely cold weather that hit the area starting New Year’s Eve, she was unable to visit again until January 6 – when she noticed the bell was gone and that the wooden tower that housed it had been destroyed.

Stanley visited the site on January 8 and checked the area for the bell – including a nearby ravine. There were foot prints and tire tracks near where the bell tower had stood. She then called the Mellette County Sheriff’s Office and visited the Rosebud Sioux Tribe’s Public Safety Department, as well as reporting the incident to her diocesan office.

Local news entities have reported on the theft. Stanley also posted information regarding the loss of St. Paul’s bell on social media and is in the process of printing flyers to circulate across the area.

“We feel, and the police believe, that the thief or thieves are local,” Stanley commented, “and that the community will force the return of the bell.”

The same bell was taken once before more than 20 years ago. The Rosebud community put word out and it was eventually found in Wanblee, on the Pine Ridge Reservation. Family members convinced the person – or persons – who stole the bell to return it. No charges were filed at that time.

Notwithstanding, any antique dealers who may have received a bell in the last 2 weeks similar to the one stolen from St. Paul’s are asked to contact the Rosebud Episcopal Mission.

A reward is being offered for information leading to the bell’s recovery, but Lauren Stanley isn’t interested in pressing charges. All she wants is St. Paul’s historic bell given back to its community.

“We will accept the bell’s return,” explained Stanley, “and offer repentance.“