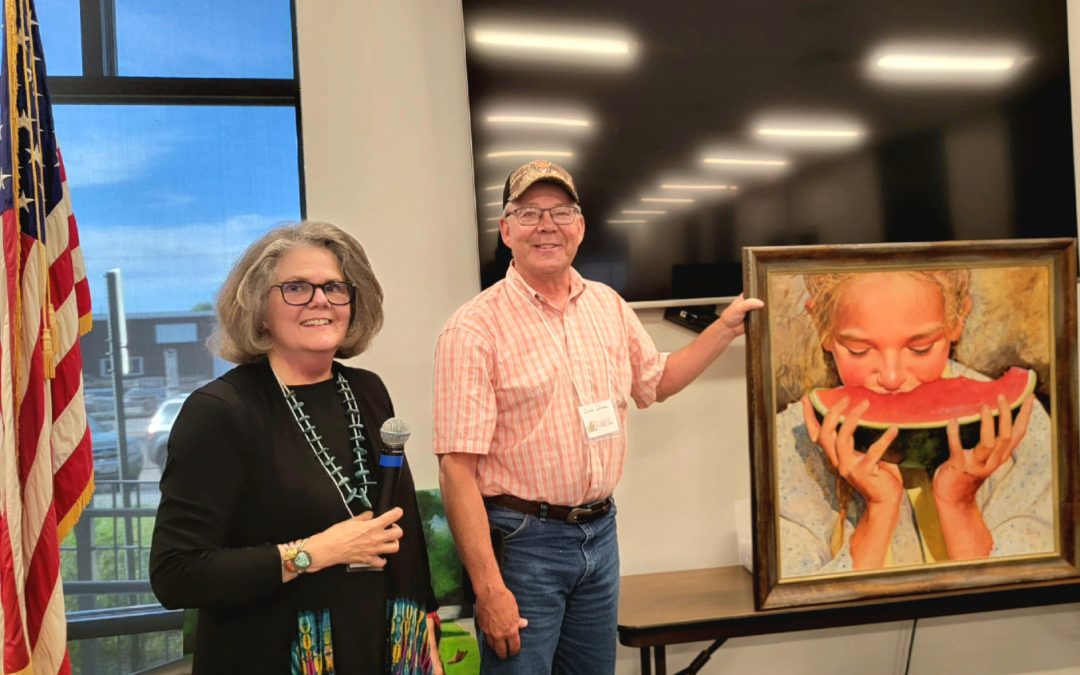 The ANAC (Association of Nebraska Art Clubs) Conference ended June 11 with more workshops and the dismantling of the 289 pieces of art from 38 clubs, with 25 of those being packaged to go on the year long ANAC Traveling show as they were the Best of Show and Award of Excellence winners, which will be in hosts’ galleries for one month. O’Neill will have the exhibition from June 12 to July 18. Of all the pieces, 4 Award winners were photos, and 3 of those were from Thedford Art Guild. Megan Licking won an Award of Excellence on her bull digging dirt with his tongue in his nose, titled ‘Snot today.’ Her photo of trees reflecting in a pond at sunset, ‘Reflections ‘ and Terri Licking’s ‘Nebraska Pre-Storm Sky’ got honorable mentions. Other winners from the area: Best of Show – David Dorsey, Sand Painters, Valentine, acrylic, ‘ Watermelon’ (pictured). Judge, Mary Binford Miller, Wichita, KS stated as soon as she turned the corner and saw the piece, she knew that would be her BoS. Other Award of Excellence winners: Daniel Smith, Arrow Artists, oil, ‘Garlicado”, Sue
Perez. North Platte Art Guild, colored pencil, ‘Stormy City’ Patsy Smith, Platter Painters Art Club, water media, ‘Enchanted Fortress’ Other Honorable Mention winners from the area: Ron Meyer, North Platte Art Guild, wood carving, ‘Cody’ From Prairie 7 Club, headquarters, Dunning, 2 members received 3 HM. Julie Kleeb, Broken Bow, got HM on her mixed media, ‘Paisley’. “This was a piece totally out of my norm”, Kleeb said. Roberta Barnes, Halsey, did 2 different oil paintings, different views both titled ‘ Morning Glow’ David Dorsey got an HM on his acrylic titled, ‘The River of Her Soul’.

For full results and to see when the ANAC Traveling Show is in your area, go to www.nebraskaartclubs.org/2022-anac-art-show