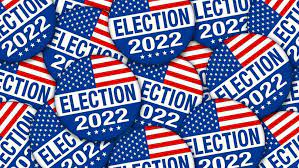 Nebraska Secretary of State Bob Evnen is predicting 35% voter turnout for Tuesday’s primary election.
Douglas County Election Commissioner Brian Kruse is also predicting a 35% turnout in the state’s most populous county, which would be higher than in any non-presidential primary in the last 16 years.
Evnen bases his statewide prediction on the return of early ballots. There were 227,679 early ballots sent out, including those to all-mail counties such as Dawes, and 122,679 had been returned by noon Friday.
anyone with a mail-in ballot who hasn’t mailed it yet has probably waited too long to do so, given the processing time needed for the U-S Postal Service.
They’re urging those voters to either bring their ballots into their county clerk’s office or to use special ballot drop-boxes.
It’s also apparently led to some late party affiliation changes. Evnen reports registration for Democrats and independents have dropped by more than 8,000 since the start of the year with Republican registrations up by about the same amount.

From the Cherry County Clerk’s Office:

Then choose ‘Cherry’ to view our results. These will be posted no sooner than 8:00 PM Central time.