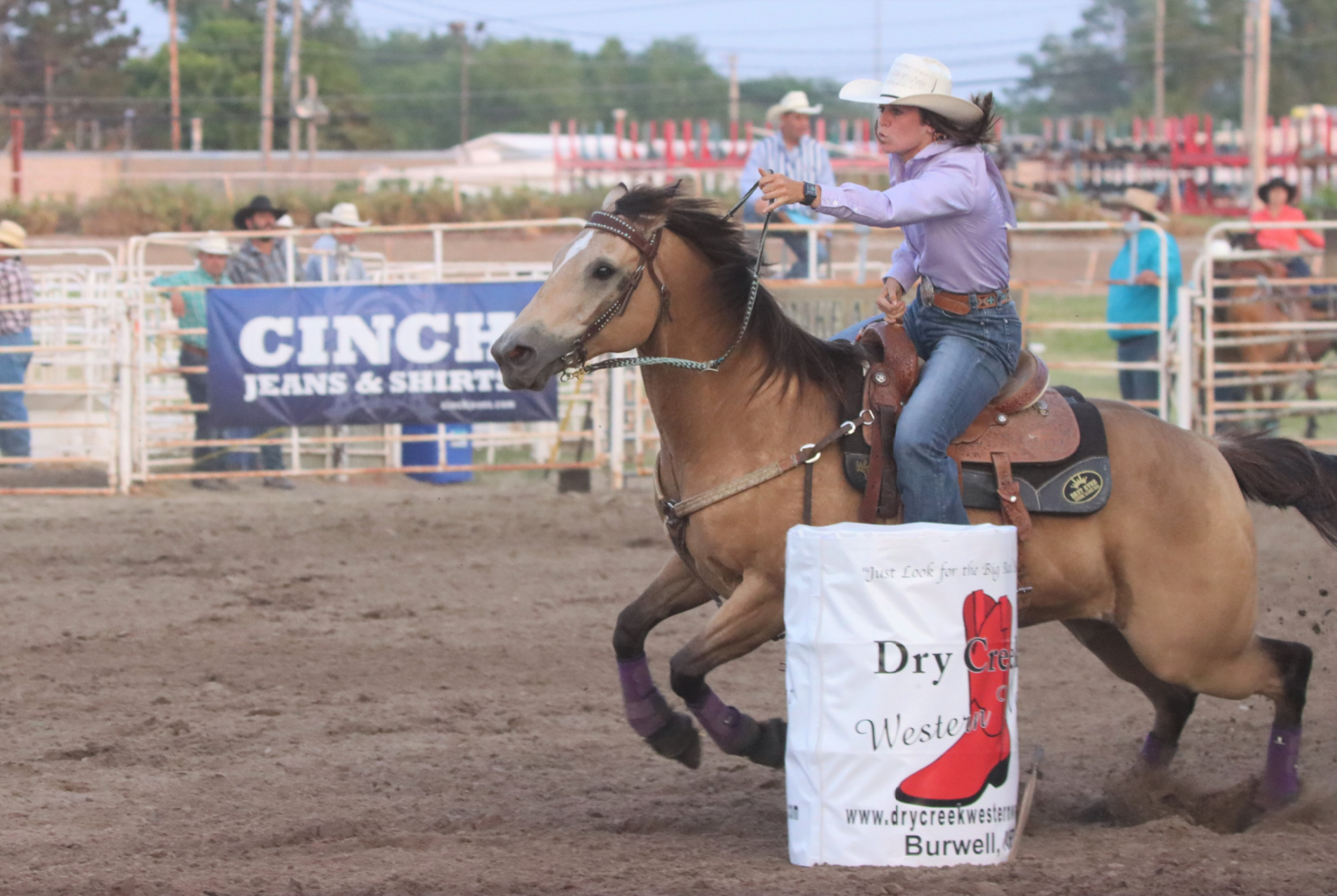 The Nebraska High School Rodeo season wrapped up last weekend with the high school finals in Hastings at the Adams County Fairgrounds. Rodeo athletes from across the Cornhusker State competed in two go-rounds on June 17-18 and the short go-round on June 19. The top four contestants in each of fifteen events were determined, and they will go on to compete at the National High School Finals Rodeo (NHSFR) in Lincoln, Nebraska, at the Lancaster Events Center July 18-24.

The following are synopses of some of the champions.

Elle Ravenscroft led the pack all year long, with her competitors in the rearview mirror.

The Nenzel cowgirl led the barrel racing rankings the entire year, and even with a bobble at state finals, finished as the 2021 state barrel racing champion.

Going into state, she was twenty points ahead of the number two cowgirl, Taci Flinn. In the first round, she finished fifth; in the second round, she tipped a barrel to add a five second penalty to her time and take her out of the placings.

In the short round, she finished second behind Flinn. “She was on my back the whole finals,” Ravenscroft said. “Being chased is not a great feeling. I had great competition and that was a little intimidating at times.”

She didn’t realize she had won the state title till the announcer mentioned it. “I was holding my breath,” she said.

She’s excited to compete at the NHSFR in Lincoln, because of its proximity. “It’s hometown. I think there will be pressure to represent your state well. I’m really excited about it.”

The 2021 Cody-Kilgore High School graduate won’t compete in collegiate rodeo; she will play basketball at Chadron (Neb.) State College, where she’ll pursue a degree in physical education and health.

She was recruited by both the basketball and rodeo coaches, but chose basketball. “That was honestly, a big decision. I decided we’re going to try basketball. I can always rodeo in the summer. I wanted the opportunity to play basketball because rodeo’s always going to be there.”

She is the daughter of Eric and Shannon Ravenscroft.

Entering state finals, he was three and a half points behind Tanner Drueke.

“I just went in super motivated, knowing I had my work cut out,” he said. “I had people to chase, and I think that honestly improved my performance more than anything.”

This is his second qualification for the NHSFR; his first one was as a freshman, which didn’t go as well as he would have liked. That provides incentive for this year. “I think it’s time to take advantage of the fact that it’s in Lincoln. It’s time to give it everything I’ve got and compete with all the year-end champs. It’ll be tough. It’ll be time to put the pedal to the floor.”

Denaeyer will be a senior at Mullen High School this fall; he participates in football, wrestling, and track and was on the honor roll for two quarters this year.

He is the son of Martin and Bree Denaeyer.

The closest race in all of the events came down to the goat tying, with eighteen-year-old cowgirl Wacey Day winning the title by one point over the number two cowgirl, Jessica Stevens.

It was a roller coaster year, with ups and downs all season, but at state, Wacey dominated, winning both the first and second round and the short round as well. “I didn’t have a choice but to do that if I wanted to win it,” she said.

She also finished second in the breakaway roping and will compete at Nationals in that as well. This will be her fourth trip to Nationals.

The salutatorian of the of Lone Star High School Class of 2021, she will attend Northeastern Junior College in Sterling, Colo. this fall and get her prerequisites done before transferring to another school to work towards a certification in radiology. She will rodeo collegiately, in the goat tying, breakaway roping, barrel racing, and team roping.

The daughter of Shane and Heather Day, Wacey is also the year-end all-around winner.

She led the state the entire year, and felt a little pressure from freshman Clancy Jo Brown, but after four years of high school state qualifications and two years of junior high, she’s taught herself how to handle the pressure.

“I’ve learned how to deal with it and calm my nerves,” she said. “I tell myself, ‘it’s nothing new, I’ve been doing it for six years (through high school and junior high rodeo), we practice all week long,’ so I trust my horse and my own riding ability and that’s how I calm myself down.”

The Sumner-Eddyville-Miller High School graduate will attend Mid-Plains Community College in McCook this fall to study criminal justice. She has decided to forego college rodeo, at least for her freshman year, to be able to concentrate on her studies. “Rodeo will take up a lot of time and practice and I’d rather focus on school,” she said.

She also finished in third place in the barrels and will be at Nationals in that event as well.

She is the daughter of Matt and Melissa McTygue.

State competition was held in an indoor shooting range, which was beneficial, he said, with no bad weather to affect the competitors.

This will be Saults’ third trip to Nationals in the shooting; he will also compete in the team roping at the NHSFR, having won second with header Brent Charlton.

He’s ready to be in Lincoln for Nationals. “I’m looking forward to representing Nebraska. I think a lot of kids will really like how big our city is and how much there is to do. When you’re in Rock Springs (Wyoming, where former NHSFR events have been held), it’s out in the middle of nowhere.” 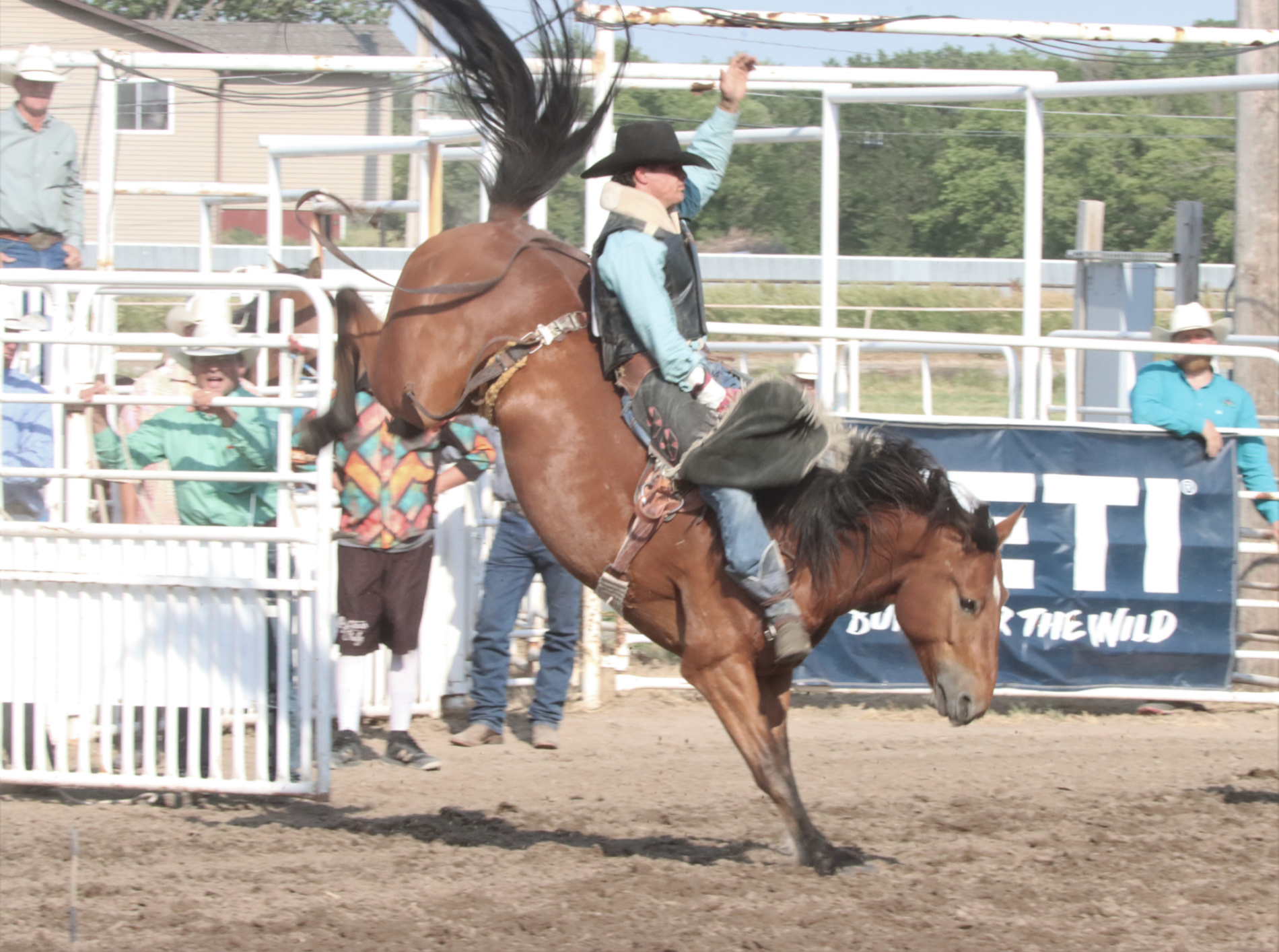