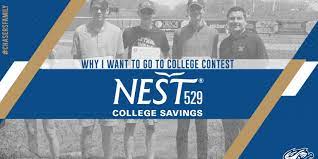 Winners in the 2021 “Why I Want to Go to College” writing contest, sponsored by the Nebraska State Treasurer’s Office and the Omaha Storm Chasers, were announced today by Nebraska Treasurer John Murante. The students will be recognized before the start of the Storm Chasers vs. St. Paul 1:05 pm game at Werner Park in Papillion on Sunday, May 9.

Students were asked earlier this year to reflect in their written entries on the value of education and what they hope to achieve through higher education. Winners receive a contribution to a Nebraska Educational Savings Trust (NEST529) college savings account, ranging in value from $500 for third place, $1,000 for second place, and $2,000 for first place. Three winners were chosen in each of Nebraska’s three U.S. congressional districts. Three winners from outside Nebraska were also chosen.

“It is exciting to be able to recognize our writing contest winners at Werner Park on Sunday and to present each of them with a contribution to their NEST529 account,” said Murante. “This is the 19th year of this contest for seventh and eighth graders, and, like in past years, the quality of the students’ writing, their clarity of vision for their futures, and their expressions of gratitude to parents, siblings, teachers, and mentors were tremendously impressive.”

Winners of the 2021 contest and their hometowns are listed below: