Ricketts Outlines Back to School Plan 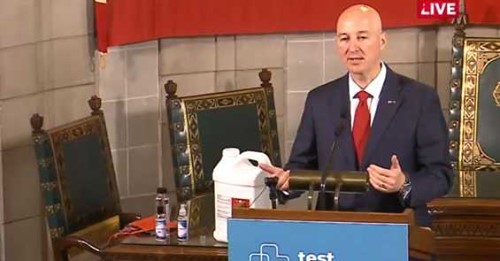 Nebraska Gov. Pete Ricketts detailed plans Friday morning on the state’s schools reopening this fall. Ricketts was joined Nebraska Department of Education Commissioner Matthew Blomstedt at the 9:00 a.m. news conference in Lincoln. Ricketts began by applauding Nebraskans for social distancing and said hospital bed capacity is up. He reminded everyone to wear masks when grocery shopping and spending time indoors. “If both parties are wearing a mask and they are closer than six feet, the risk of spreading the virus decreases,” he said.

Ricketts also reminded people to sign up for testnebraska.com

The governor said there will be a number of press briefings leading up to kids returning to school in the fall. “It’s important that we get kids back in the classrooms,” he said. “Distance learning for some students is not going to be effective.” Ricketts also said kids returning to the classrooms is important from a mental health aspect. “Social isolation is not good for kids,” he said.

Ricketts said schools contribute to an active lifestyle and make sure kids get important nutrition. Ricketts asked that parents be “patient and gracious” and work with principals and superintendents.

“As we look at ringing kids back, it’s going to be a building by building decision, and some of these decisions are going to be very difficult,” he said. “We ask for parents to work together with their schools.”

Ricketts said it will be up to individual schools whether they return to classrooms or not. “This is a pandemic that we have not experienced our country, in over a century, we’re all learning our way through this,” he said.  Blomstedt said education officials have been working with individual districts to put together guidance for officials as they decide how to return to school.

He described different districts COVID-19 risks being monitored in a green, yellow, orange and red capacity. Green will allow students to proceed as normal, while red would return districts back to at-home learning.

“If you’re in the green largely you’re in a good position to be able to run schools in a full capacity perspective. We believe if you’re essentially in the yellow, you’re able to run schools in a capacity that wants you to be cautious, make sure that you have all of the appropriate PPE and that there’s an opportunity to maintain social distancing. As you approach an orange, for instance, you start to have to have concerns whether or not you can be at full capacity and red is essentially that you’re back to a position where you should be remote learning completely. So schools have been building their plans along those lines really looking at ways that they can ultimately open up safely and do that well, but there’s much more work to do,” he said.

“Having students in schools is absolutely critical,” Blomstedt said, agreeing with Ricketts.

CEO of Nebraska Department of Health and Human Services Danette Smith announced that DHHS has awarded Federally Qualified Health Centers a grant of $5 million that will go toward with case management for health care of patients, expanding testing and contact tracing, and stabilizing health care’s infrastructure.

During the question and answer portion, Ricketts said he would not require Nebraskans to wear masks in public because he trusts all people to “do the right thing.”

“Generally local health departments have to check in with us and so they’re not going to be able to make those mandates without us,” he said. “We’d like to make this a collaborative process, but we’re working with our local public health departments on this. I encourage them to continue to educate people with regard to when you should use a mask, if you’re going to be closer than six feet, in an enclosed space, that’s when you should use a mask. But we’re not going to mandate it,” he said.

Asked why schools were closed in March but are being encouraged to reopen in the fall, Ricketts said we are in a much different place than before.

“In March, there was a lot we didn’t know about the virus. Now we know for example, there’s still a lot we don’t know, but the research shows that younger kids are not as impacted by the coronavirus, that they don’t tend to transmitted as much, so we know a little bit more from that standpoint. We also have much greater resources with what was the response so for example that we were referring to was really because we didn’t have the testing, to be able to know. And that was a kind of a rule of thumb, we used to be able to understand what might have community spread. We’re in a very different situation now with regard to the resources we have with regard to testing,” he said.