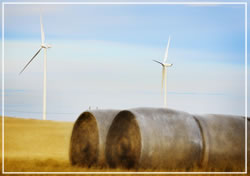 According to documents filed in the District Court of Cherry County, Preserve the Sandhills has filed a third complaint against Cherry County and other defendants along with a motion to consolidate lawsuits currently pending.

On June 26th Preserve the Sandhills and several individuals filed a complaint asking the court to vacate, reverse, and nullify an extension for the Conditional Use Permit granted by Cherry County to BSH Kilgore for a wind farm near Kilgore. This comes after the same group filed separate complaints about conflict of interest by two commissioners and a petition to reverse the granting of the initial conditional use permit. There has been not ruling from Judge Koziseck on the complaint challenging the CUP at this time.

Earlier this week Preserve The Sandhills along with Charlene Reiser McCromick, William Schmitt, Danielle Robinson, Shawn and Kayte Robinson, Jim and Anita Robinson, John Hamilton, Kort Hamilton, Marion and Merrial Rhoades, Wayne Eatinger and Deborah Galloway, filed a motion to consolidate the latest filing, which opposes the extension, with the previous complaint objecting to the initial CUP. A telephonic hearing on this motion to consolidate has been set for August 21st.