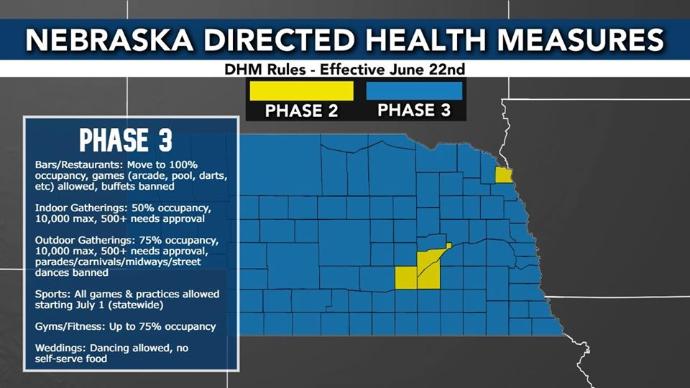 Sports
Fan attendance for youth and school games changes to same limit as Gatherings on June 22nd.
-No longer limited to household members only.
-Contact team sports may begin practices and games on July 1st.

Bars & Restaurants
-Restaurants, Bars, Bottle Clubs, and Gentlemen’s Clubs remain open for dine-in.
-Patrons will be required to be seated while on premise unless they are placing an order, using the restroom, or playing games.
-100% of rated occupancy.
– Maximum of eight (8) individuals in a party (groups larger than eight (8) will need to split into multiple tables.
– Food MAY BE consumed at bar seating.
– Self-serve buffets and salad bars are prohibited. Venue staff must serve food directly to all individuals.
– Games such as pool, darts, arcade games, etc. ARE allowed.

Plans for reopening or expanding to new capacity limits must be submitted to the local health departments and approved for all indoor and outdoor locations/venues that hold 500 or more individuals (1,000 or more in counties over 500,000 population) before reopening is permitted. The reopening plan must contain planned number of guests, how the location will meet social distancing guidelines, and sanitation guidelines.

Salons, Barber Shops, Massage Therapy Services, & Tattoo Parlors/Body Art Facilities
– Will be limited to 75% of rated occupancy.
– Both workers and patrons are still required in the DHM to wear masks at all times.
An exception will be made for all services performed on faces. Patrons will be permitted to remove their mask while receiving services directly. The mask must be worn by the patron at all other times while on the premise.

Wedding & Funeral Reception Venues
– Maximum of eight (8) individuals in a party (groups larger than eight (8) will need to split into multiple tables).
– Self-serve buffets and salad bars are prohibited. Venue staff must serve food directly to all individuals.
– Limited dances or other social events requiring guests to gather outside of their respective tables in guidance.

Gov. Ricketts expects schools to have students back in class this fall. The Nebraska Department of Education is still deciding how it’ll do so safely to protect students and staff.

Phase 4 was also announced at the press conference, however a date has yet to be decided. During Phase 4, most DHMs will be removed and replaced with guidance. The exception to this will be for gatherings, in which indoor gatherings will be limited to 75 percent rated occupancy while outdoor gatherings will be allowed to have 100 percent occupancy. Six-feet separation between groups will remain in guidance.