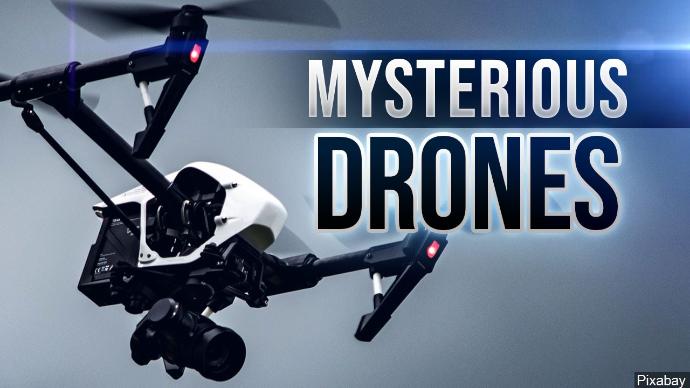 The Federal Aviation Administration is working with state and local authorities to determine who’s behind a series of mysterious nighttime drone flights over northeastern Colorado and western Nebraska. A Colorado sheriff hosted a meeting with law enforcement agencies and government officials Monday to talk about the recent rural sightings. The drones reportedly have 6-foot wingspans and fly in grid-like patterns hundreds of feet in the air in groups of six to 10. The FAA says it’s taking the sightings seriously and working to find out who’s operating the devices and why. Sheriff’s officials say it appears that no laws are being broken.

KBRB Radio reported that drones have been spotted in Brown, Rock and Keya Paha counties, and social media reported a sighting in southern Cherry county on Tuesday evening, January 7th.

According to KBRB, area law enforcement agencies received more than a dozen calls between 8 and 10 p.m. Monday from residents reporting drone sightings. Brown County Sheriff Bruce Papstein said calls came in from southern Brown County to east of Long Pine and into Keya Paha County near Burton, with area residents reporting drones flying overhead. Papstein said some of the calls indicated groupings of 12 to 17 drones flying in a pattern from east of Long Pine north into Keya Paha County near Burton. Papstein said a Nebraska State Patrolman confirmed a drone sighting in Springview late Monday evening. The Rock County Sheriff’s Department received seven calls regarding drone sightings, with the first coming just prior to 8 p.m. and the final call coming in around 10 p.m. Those callers reported sightings west of Bassett, in Bassett, and southeast of Bassett.

Papstein urged any area resident, for the time being, to report to law enforcement all drone sightings as well as any vehicle that seems out of place for the area, especially vans or vehicles pulling trailers.

U.S. Sen. Deb Fischer, a member of the Senate Commerce Committee, which has jurisdiction over the Federal Aviation Administration, said Tuesday she spoke with FAA Administrator Steve Dickson regarding the recent sightings of unidentified unmanned aircraft systems, commonly known as drones, in Nebraska.

“Nebraskans are rightly concerned about the recent drone activity,” Fischer said. “This morning, I spoke with FAA Administrator Dickson directly who informed me that, as of now, there are still no answers about who is using these drones. Yesterday, the FAA, FBI, the Nebraska State Patrol, and local law enforcement officials from Nebraska and Colorado met to discuss how to address this problem.

“An investigation is underway and the best thing Nebraskans can do right now is continue to report any drone sightings to law enforcement. I will continue to share information with the public as it becomes available.”

People are being asked to report sightings of clusters of four or more UAS (Unmanned Aircraft Systems) (not single sightings) and include the location and general direction and movement of the UAS clusters.

Also pay attention to the lights (configuration, number, color, patters), estimated size, number of rotors, if fixed-wing and shape(s). Also listen to what it sounds like.

NIAC is also interested to know the flight behavior (Did they fly straight, move side to side, up/down, back/forth, in a grid-patter, over what area). Try to keep track of how long you observed the drones.

Another thing to look out for is “control vehicles/personnel, SUVs, vans or trailers, possibly with antenna”.

If possible, take or obtain any video of the objects and email it to nefusioncenter@nebraska.gov.