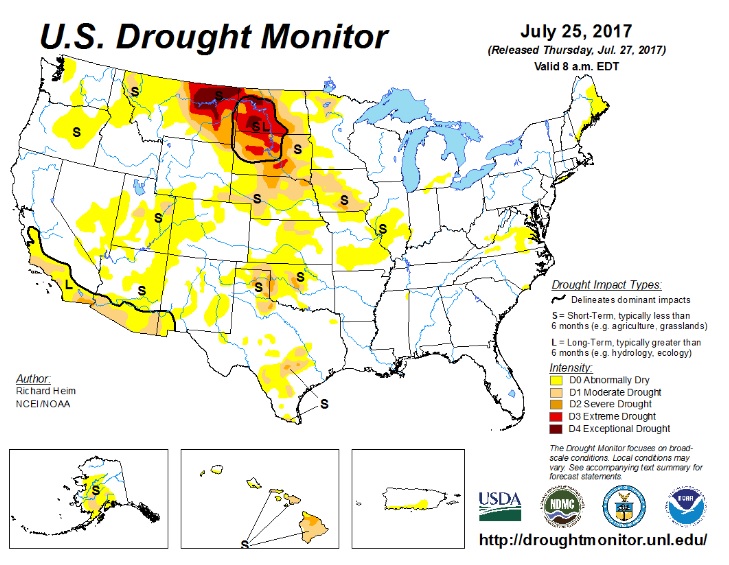 Drought conditions are getting worse in several states, and extreme heat and weeks with little rain have begun to stress corn, soybeans, wheat and livestock in some areas.
The weekly U.S. Drought Monitor released Thursday by the University of Nebraska-Lincoln says nearly 11 percent of the continental United States is in moderate drought or worse.
The most severe drought area is centered on portions of Montana, North Dakota and South Dakota.
The United States Department of Agriculture has designated several counties in those states as areas of natural disaster, paving the way for emergency loans for producers. Iowa, Kansas, Nebraska, Oklahoma and Texas also are seeing stressed crops and farm animals.
About half of U.S. spring wheat, 15 percent of corn and 14 percent of soybeans are in drought.

Drought conditions in South Dakota haven’t changed much over the past week.
The latest U.S. Drought Monitor map shows 80 percent of the state in some stage of drought, down from 82 percent last week.
However, 15 percent of the state is now listed in extreme drought, up from 11 percent last week. Those pockets are in the central and northwest regions.
Nearly all of the state remains in some stage of drought or abnormally dry.
Farmers and ranchers in several counties are eligible for aid due to disaster declarations in the Dakotas by the federal government.