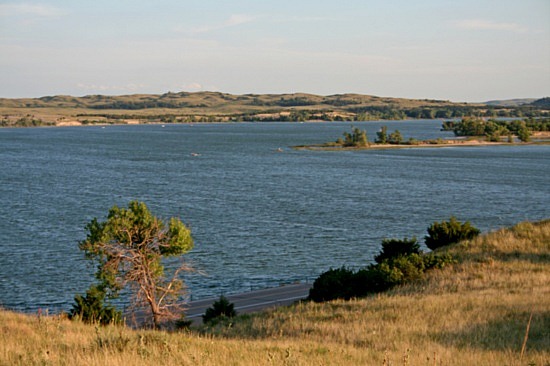 Apparently due to the tragic death of an area 3 year old from E. coli bactieria, there have been rumors that the cause was from contaminated lake water at Merritt Reservoir. According to a family member the strain of bacteria that claimed the young life was from the food born variety. There is always a certain level of E. coli in the reservoir, just like there is in any body of water where animals are present. The levels at Merritt are monitored continuously and warnings are posted when levels are deemed to be a health risk. The most current readings, taken on July 17th, do reach the health risk warning level for ingestion. Local Game and Parks personnel told KVSH that the public can utilize the lake at their own risk, taking usual precautions such as showering after swimming, washing hands before eating, and not ingesting the water. Another bacteria measurement will be taken on Monday. Looking at past DEQ records the E. coli level at the lake does take a normal spike at this time of the year.

Infections start when you swallow STEC (Shiga toxin-producing E. coli) —in other words, when you get tiny (usually invisible) amounts of human or animal waste in your mouth. Exposures that result in illness include consumption of contaminated food, consumption of unpasteurized (raw) milk, consumption of water that has not been disinfected, contact with cattle, or contact with the feces of infected people. Some foods are considered to carry such a high risk of infection with E. coli O157 or another germ that health officials recommend that people avoid them completely. These foods include unpasteurized (raw) milk, unpasteurized apple cider, and soft cheeses made from raw milk. Sometimes the contact is pretty obvious (working with cows at a dairy or changing diapers, for example), but sometimes it is not (like eating an undercooked hamburger or a contaminated piece of lettuce). People have gotten infected by swallowing lake water while swimming, touching the environment in petting zoos and other animal exhibits.

The water levels are continuously monitored and more information can be obtained on the DEQ site here: http://www.deq.state.ne.us/beaches.nsf/3b3bba0239e5ee37862580ea007cfea3!OpenView