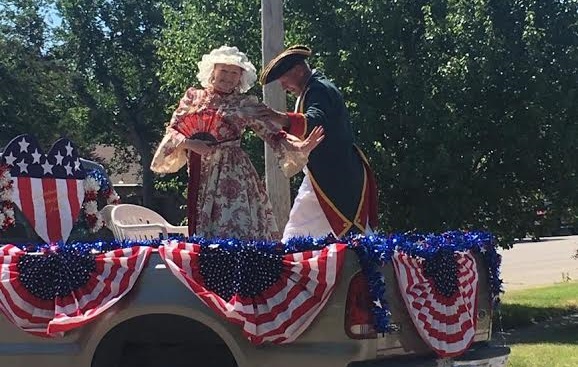 The Valentine Lions’ Club sponsored the annual Independence Day parade in Valentine. There were lots of great entries for this year’s parade, from floats to kids on bikes and of course, the Valentine Volunteer Fire Department celebrating our nation’s independence and freedom. The theme for this year’s parade was I “Heart” Patriotism. Winners of this year’s parade were the Zumba Kids with Heartland Tubes in first place, “Home Sweet Home” by D6 Lantana Ranch and the Swanson family took second place, and in third place was Advanced Pet Care Clinic’s “Pets, Pony and Pride” entry. Top three entries in the parade will win Valentine Chamber Bucks from the Lion’s Club.
Pictured: George and Martha Washington, aka Don and Ginny Nelsen.
After the parade, the Let Freedom Ring program was held, which is the national program recognizing the bravery and sacrifices of those men and women who were involved in the Revolution that made us a country.
Over 70 folk joined the American Legion family to read the Declaration of Independence and ring bells to celebrate living in a free republic.
A combination of intrepid teens and adults took on the reading of the Declaration and did a great job. Thank you to all the tall and small that made this day a real celebration of our country.