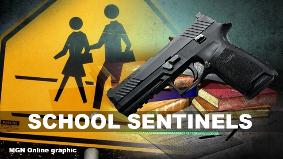 A school in Mellette is the second in South Dakota to allow approved employees to carry guns.
The American News reports that the Northwestern Area School Board approved the move unanimously this month.
South Dakota lawmakers passed a school sentinel law in 2013, a few months after the deadly Sandy Hook Elementary School shooting in Connecticut.
The Tri-Valley School District last summer became the first district in the state to take advantage of the law.
Teachers or staff members need to go through an application process, including a mental health evaluation, and take the same training that law officers do before they can be a school sentinel.

Editor’s note: a previous headline of this article incorrectly identified the school in Mellette County. The school is located in Mellette, SD, in Spink County of northeastern South Dakota.