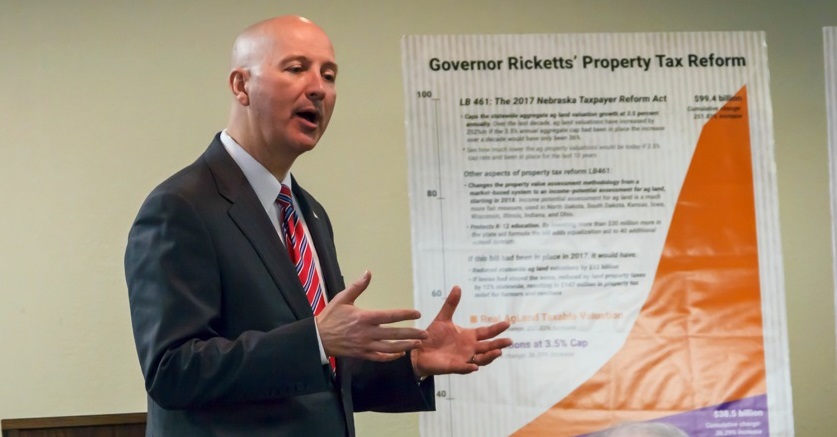 Governor Pete Ricketts spoke to a crowd of constituents on Tuesday evening at the Niobrara Lodge in Valentine. The main topic of discussion was the support of LB 461, the 2017 Nebraska Taxpayer Reform Act. In defense of the bill, the governor touted it’s ability to change property value assessment methodology from a market-based system to an income-potential assessment for ag land starting in 2018. It would also cap statewide aggregate ag land valuation growth at 3.5 % annually. The governor also suggests that the bill would reform income taxes, lowering taxes for the lower and middle classes.
At the conclusion of the event, the governor took questions and comments from constituents ranging from the brand commission to the state of the state’s correction system.
The governor also took questions concerning his position on wind turbines in the area. Governor Ricketts did not take a position, simply stating that “zoning is a local issue, as it should be”.
When asked about the transmission line, known as the R-Line, Governor Ricketts state that while the line would be capable of carrying wind-generated power, the purpose of the line is for reliability of electricity from the Gerald Gentleman power plant to the rest of Nebraska.
The legislative update, question and answer time, and the meet and greet time following took approximately 90 minutes.
Photo: Laura Vroman